Having a Hard Time Finding My Lenses

It has been a while since my last post. There has just been a lot going on. I am sure many of you can relate to unrelenting schedules. This post I am about to write is my least favorite kind of post. The kind where I don't have clear vision. Where a haze is all that is visible in every direction. I wrestle during these times if I should even write but I am compelled to because someone is out there, maybe not at this moment but maybe coming behind me that will be where I am at and they will need to know they are not alone. They will need to feel some sense of comradeship. 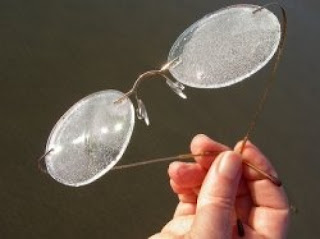 I am having a hard time finding my faith lenses. The struggles with the girls have been hard and many lately. To begin we had to make a school decision that was very hard to make. The christian pre-school we put them in, well... reality set in. Jubilee's behaviors were described as overwhelming. Our hearts completely sank as once again we were sitting in a meeting about our daughter and hearing the same things once again. Eric wasn't shocked. I think he prepared himself for reality better than my hopeful Mama's heart. We felt it was best to decide to go back to public school just for the safety that they can't decide her behaviors are too much at any point and they have to educate her. Everywhere she goes her cuteness fades, reality sets in and she becomes "that" kid. You know the one that is exhausting and frustrating and always has issues. Medications have brought no help at this point either. In fact the side effects are ones I am not willing to inflict upon my child.

Potty training remains a complete mystery. I do know how to potty train a child I mean I have successfully trained 4 boys in the past but I am completely stumped with these girls. Jubilee actually told me a little over a week ago after she had peed on the sidewalk, she proudly took my hand to show me the puddle then grinned ear to ear and said "look Mommy I pee pee in the potty." The dots just don't connect even if they say and sometimes do things that make you think they are connecting because the next day it will be like starting completely from scratch.

We just came back from a four day get away as a family and I feel like I was beat and left for dead. I can not even number the times we looked back to see the girls had once again unbuckled from their car seats and were loose as we were driving. The tantrums were also countless. I just kept my eyes to the ground and would not look anyone in the eyes who I knew were starring at this "inept parent" in front of them.

The big discouragement came when Jubilee decided to pull her, not a bit loose tooth out of her head. I had read about F.A.S children doing this before and now we are another statistic. These are just some of the numerous three and four year old challenges we daily face and I can not even let my mind think on what teenage challenges might be. The ones I have read about are terrifying.

Hidden disabilities are the worst. Your child looks "normal" can even say the right things but the actions don't line up or follow suit. Sometimes we feel like physical presentations of their disabilities would be easier and maybe others would be more tolerant or understanding.

My lenses right now are experiential. They are caked with the challenges and the behaviors. I am asking God to clear the debris. For light to shine in the darkness. For a renewed faith perspective and hope.

I once again pray these words over my girls:

"For I know the plans I have for you, Jubilee and Mercy, plans to prosper you and not to harm you, plans to give you a hope and a future." Jeremiah 29:11

So even in my hardest struggles, in the deep pits,  in the dark...God is here.

Email ThisBlogThis!Share to TwitterShare to FacebookShare to Pinterest
Posted by Michelle at 8:03 AM