Chomping At The Bit

Dear Ones:
There is a contest that I am just chomping at the bit to win. There is an amazing photographer and her work is so what I would like to be able to emulate. When I see what she has done I just drool all over the place. SIMPLY AMAZING. This is the type of artist I want to be someday. She is giving away her photo workshop workbook on her blog. I have longed for these workbooks for such a long time but with 6 kiddos it just is not at the top of the list of things to purchase when it comes to the budget, so I have all my toes and fingers crossed hoping to WIN! This blog post is one of my entries. Go to her site and check it out, Just click the link below:
SOULOGRAPHER

Email ThisBlogThis!Share to TwitterShare to FacebookShare to Pinterest
Posted by Michelle at 9:22 AM 2 words of encouragement

Dear Ones:
The doctor called today and the heart murmur was a flow murmur which will not require any more medical action. INSIGNIFICANT Praise Jesus! Thank you for praying!

Email ThisBlogThis!Share to TwitterShare to FacebookShare to Pinterest
Posted by Michelle at 4:15 PM 2 words of encouragement

Challenges Are Hard - One Of Those Days

Dear Ones:
Today is one of those days where you either have to laugh or cry. I am currently somewhere in the middle. Big Sister had to have an echocardiogram today. The doctor heard a murmur and wanted further investigation. We are hoping it will be insignificant.
Here is the scene from the hospital.
Picture one white woman (that would be me) coming into the ER with a twin stroller with two beautiful brown baby girls. Sounds peaceful right? Well, I came in with my hair blown to bits because it was so windy outside, but I was praising Jesus it was not raining because it took me forever to open the stupid stroller. It is an ancient one and lets just say not the most user friendly. The appointment was at 11:00 and who knows why because I did not get in until 11:45. This left plenty of time for an adventure in the waiting room. Baby girl was awake during her nap time and was discontent. Big sister was major disgruntled because she wanted out of her buckle which I was not about to do. Been there done that and not a wise choice. I thought to myself goldfish will help. They help everything right? Big sister then began to chew the goldfish up then spit them over the side of the stroller as if it were tobacco or something. I decided OK we are all done with goldfish then. Well Big sister was so upset about that decision that she proceeded to swing her arm back and then hit me as hard as she could as she let out an Incredible Hulk growl. I could feel the eyes burning in my back but I did not have the courage to look anyone in the eye. Finally they called for us. I am sure everyone was happy to have us leave. Then the real fun began as the ultrasound room looked more like a WWE event. I basically had to pin her down. The Tech tried to give her some gel to use as "lotion" as a distraction which she proceeded to eat as she was writhing around on the bed. The Tech assured me it was water soluble and safe. Let's just say I never want to do that again.
Now that the drama is over we are waiting on the results. Please pray with us that they bring good news. I'll post when I know something.
Big Sister has some challenges. She is behind in her speech. Her vocabulary is minimal which brings lots of whining. Sign language has helped some and I am hoping speech therapy will do wonders. It just makes me incredibly sad for her start in life. Pray we can give her what she needs to be the best herself she can be. I hope you had a good laugh at my expense!
Blessings!

Email ThisBlogThis!Share to TwitterShare to FacebookShare to Pinterest
Posted by Michelle at 12:22 PM 5 words of encouragement

Dear Ones: I got this devotional in my e mail this morning and I just had to share it with you:

Would it shock you to know that Jesus experienced the feeling of having accomplished little?

In Isaiah 49:4 we read these words: “Then I said, I have labored in vain, I have spent my strength for nought, and in vain….” Note that these are not the words of Isaiah, who was called by God at a mature age. No, they are Christ’s own words, spoken by One “called…from the womb; from the body of my mother…The Lord…formed me from the womb to be his servant, to bring Jacob again to him, (and to gather )” (49:1, 5).

When I came upon this passage, one that I’d read many times before, my heart was in wonder. I could hardly believe what I was reading. Jesus’ words here about “laboring in vain” were a response to the Father who had just declared, “Thou art my servant…in whom I will be glorified” (49:3). We read Jesus’ surprising response in the next verse: “I have labored in vain, I have spent my strength for nought” (49:4).

After reading this, I stood to my feet in my study and said, “How wonderful. I can hardly believe that Christ was this vulnerable, confessing to the Father that he was experiencing what we humans face. In his humanity, he tasted the same discouragement, the same despondency, the same woundedness. He was having the same thoughts I’ve had about my own life: ‘This isn’t what I perceived was promised. I wasted my strength. It has all been in vain.’”

Reading those words made me love Jesus all the more. I realized Hebrews 4:15 is not just a cliché: our Savior truly is touched with the feelings of our infirmities, and was tempted in all ways as we are, yet without sin. He’d known this very same temptation from Satan, hearing the same accusing voice: “Your mission is not accomplished. Your life has been a failure. You’ve got nothing to show for all your labors.”

Christ came into the world to fulfill the will of God by reviving . And he did just as he was commanded. But rejected him: “He came unto his own, and his own received him not” (John 1:11).

Why would Jesus, or any man or woman of God, speak such despairing words as these: “I have labored in vain”? How could the Son of God make such a statement? And why have generations of faithful believers been reduced to such despondent words? It is all the result of measuring little results against high expectations.

You may think, “This message sounds like it applies just to ministers, or to those called to do some great work for God. I can see it being meant for missionaries or the Bible prophets. But what does it have to do with me?” The truth is, we’re all called to one grand, common purpose, and to one ministry: that is, to be like Jesus. We are called to grow in his likeness, to be changed into his express image.

I (Michelle) can so relate to that emotion. I am sure many can. Our whole adoption process is NOTHING like what I perceived to be promised.We were once told we were foolish to have done this and often times I told the Father that is just how I felt. I read something this week though that brought me comfort. "We all err in many ways. Let me err on the side of faith." Beth Moore I have no doubt in our excitement to bring home our daughter Eric and I made mistakes. Thank God he does not withhold his help after the fact. I am sure God has awesome things in store. I can certainly say he brought us to a place I never would have chosen but I love where he has brought me in HIm. I look forward to where He is going to take me. Let me end with this:

"Whether the circumstances that lead to our fiercest battles are someone else's fault, our own fault, or the fruit of life's unfairness, having God as our Father grants us this hope: A perfect setup for catastrophic defeat is also the perfect setup for miraculous victory." Beth Moore

I praise God that he understands me. How unsafe it would be if he didn't. I am hoping that if I err it is on the side of faith and I am waiting for miraculous victory. I can't wait to see what that looks like.
Blessings!
P.S. ( I have some more blessings to share later when I get some more pictures, this was just burning in me this morning)

Email ThisBlogThis!Share to TwitterShare to FacebookShare to Pinterest
Posted by Michelle at 8:15 AM 1 words of encouragement 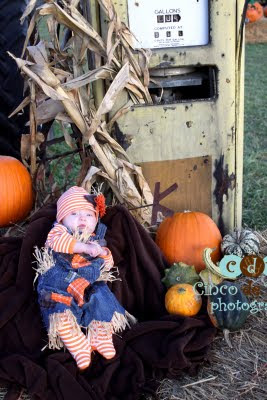 Dear Ones: This week over at I heart Faces the challenge is Halloween Dress up. Just last week I had a photo shoot with an adorable little one who was the cutest scarecrow ever. Leave me a comment and let me know what you think then head on over to I heart Faces to check out the other entries.

Email ThisBlogThis!Share to TwitterShare to FacebookShare to Pinterest
Posted by Michelle at 7:29 AM 14 words of encouragement