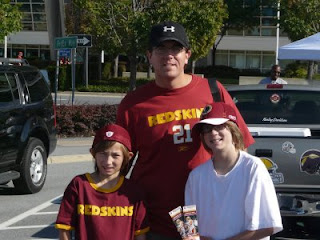 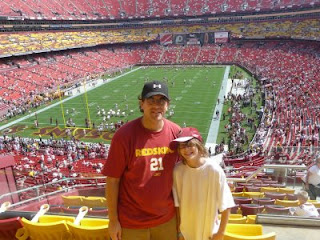 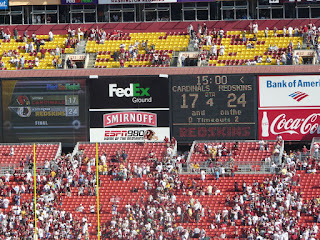 Dear Ones:
I should have blogged about this last month when it happened but it got away from me. Better late than never. Well, our Elijah is a BIG Washington Redskins fan. I credit this to my brother from another mother with the same perfect father, Skinner.
He has converted all my guys as you can see.
Here is how it all went down: Elijah was watching a Redskins game and saw a watch and win contest. He immediately went online to enter for a chance to win. Eric and I both told him no one ever wins those contests. Well, a little while later Elijah received an official e mail from the Redskins stating that he had won!!!!! He received 2 tickets, hospitality passes and a parking pass to a game. Needless to say Eric and I were way wrong and Elijah was WAY EXCITED!
Skinner also had tickets to that game and they were able to stay together. Skinner also had an extra ticket that he lovingly shared with my Noah. We have such AMAZING friends!
All my guys had a blast making wonderful memories! Enjoy the pics that captured some of them from that day! Oh and the Redskins won woo hoo!

Email ThisBlogThis!Share to TwitterShare to FacebookShare to Pinterest
Posted by Michelle at 1:43 PM